At some point, you will need a large batch of brownies. Perhaps you need a large dessert for a Superbowl party, or for kids on a sports team or in a classroom, or just a long weekend with you and some Netflix. I’m not here to judge, I’m just here to help you succeed in your brownie quest, the answer to which is to make sheet pan brownies. 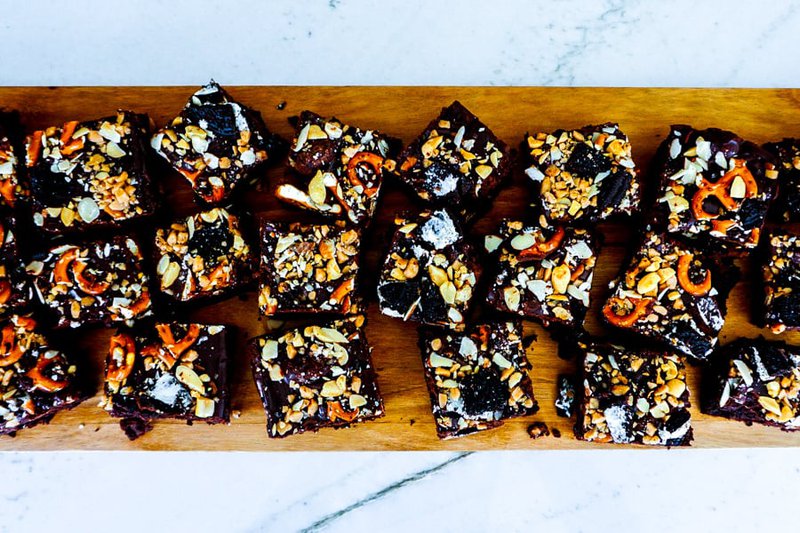 Using a sheet pan make brownies is very simple. We’ll use a half sheet pan (18x13 inches), which in my recent bake, yielded about 48 large brownies. Since my recipe is super chocolately, you can easily cut these brownies into smaller portions and probably get up to 70 or 80 squares of brownies. 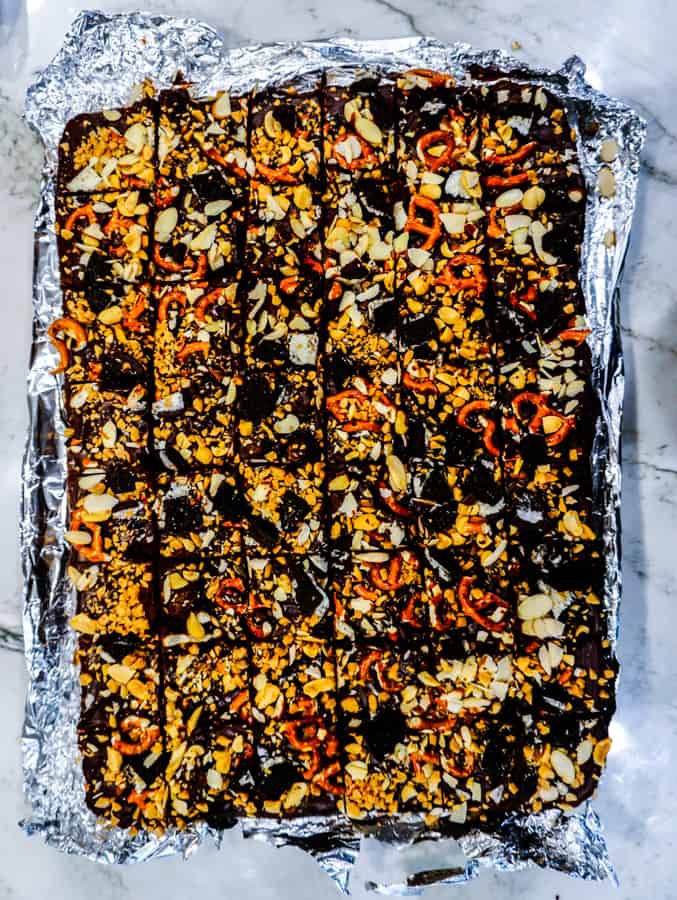 And this is not a standard brownie recipe; I have decided to add salty flavors to a really sweet dessert, which is actually one of my favorite flavor combinations. There are pretzels and toffee bits and Oreos! But we'll get to that in a sec.

When choosing a sheet pan, try to get one that has enough height on the sides to hold the batter in. I’m also using my super fudgy recipe, so not only is it easy enough to cook all these brownies in one sheet pan, you are also going to mix this in one bowl. It requires a little arm strength, but the caloric output in stirring these brownies roughly equates to eating about 4-5 of these. I think.

Anyways, since these brownies have a layer of ganache on top, I decreased the depth of brownie layer so that it’s not too much chocolate with the ganache and toppings. I know I just wrote the words “not too much chocolate”, which theoretically, should never be said on a dessert blog, or in real life for that matter, but these brownies are meant to be a little on the salty side, which requires me to alter the ratio of brownie bottom to ganache on top. 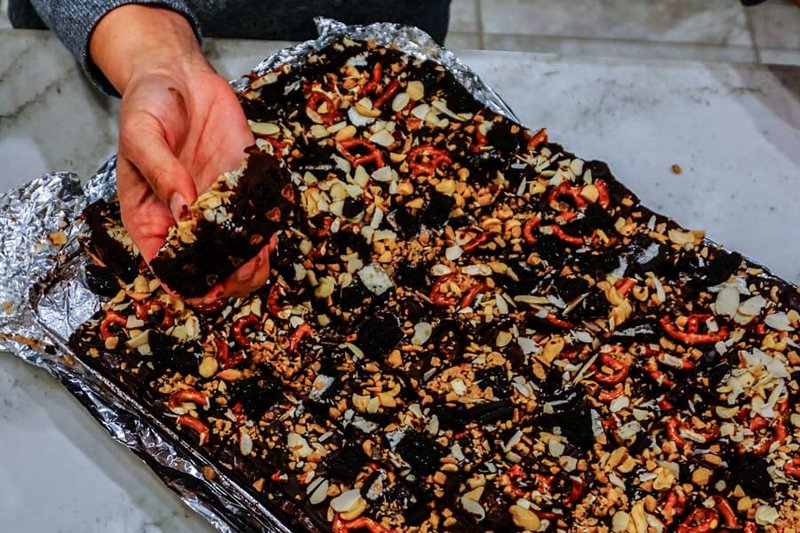 And speaking of the ganache, let’s go over toppings. There are plenty of things that you could place on top of the ganache for these brownies. I went with a combination of pretzels, toffee bits, nuts, Oreos and sea salt because that’s what my favorite snack at Trader Joe’s has on it.

It’s called Cowboy Bark, and aside from its questionable name, it’s quite delicious. I can and will overlook the possible overtones of sexism because it is dark chocolate and pretzels and Oreos and sea salt together.

I wish other things in life were that easy to overlook, but alas, that is another post for another time. (And perhaps another blog.)

For now, here is the super duper recipe to my sheet pan brownies. 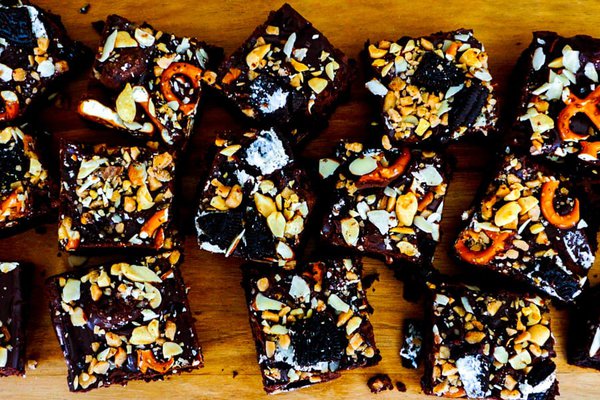 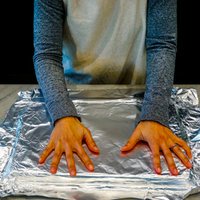 1. Place a rack in the middle of the oven and preheat to 350 °F. Line a half sheet pan (18x13") with foil and spray lightly with cooking spray. (The way I cover the interior with foil is to turn the pan upside down, mold the foil to the outside of the bottom of the pan. Then remove the foil, turn it back right side up and place the foil inside. It should fit perfectly.) 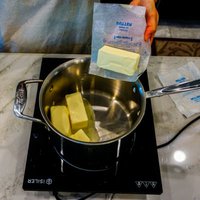 2. Add butter to a large saucepan on medium low heat. Melt the butter and turn off the heat. 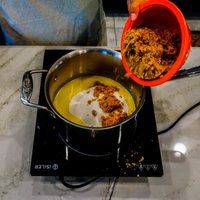 3. Add both sugars and whisk until sugars have melted just a bit and completely combined - it will turn into a really thick, light brown paste. 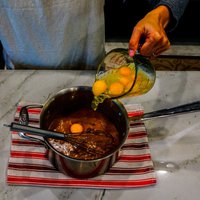 4. Take saucepan off heat and let it cool for about 5 minutes. Whisk in eggs, cocoa, salt, baking powder and vanilla until smooth. 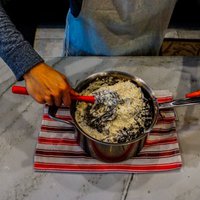 5. Add in flour and chocolate to saucepan with a spatula and stir until no flour remains. 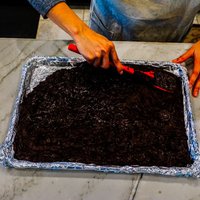 6. Pour into your greased pan, smooth out the top with your spatula, and bake for 30-35 minutes. The brownies will seem a little underdone, and a toothpick will come out wet and with lots of crumbs attached. (Though the skewer should not come out with thick, raw batter. That means it needs a little more time in the oven.) The edges will seem more done that the middle. Cool before adding the ganache topping. 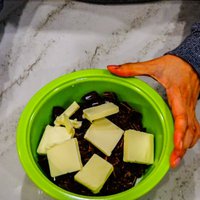 1 - FOR THE GANACHE. Place the chocolate, milk and butter in a large microwave-safe bowl. Heat in 15 second increments, stirring after every heating. 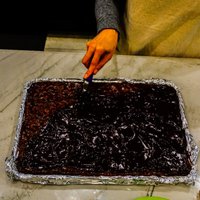 2. Once the chocolate is melted, smooth, and shiny, pour onto your cooled brownies. Use an offset spatula to smooth somewhat. It doesn't have to be perfect since we're piling stuff on top, but you want it distributed over the entire brownie surface. 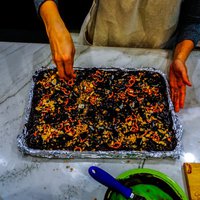 3. Add your toppings; I like to start with the big stuff first - broken Oreos and pretzels, then work my way through the nuts, toffee bits and sea salt. Press gently at the end to make sure it's cemented into the ganache. 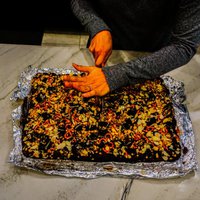 4. Cool completely before cutting. I like to put the whole tray in the freezer for at least a half hour. This will ensure you get nice clean cuts through the fudgey brownie and chocolate ganache.

I'm gearing up for a monthly newsletter!

We'll be talking about baking news and stuff I'm working on for you. Sign up here to be the first to get it.